Jes has one thing going for her: the Fives, an ancient Greek-ish version of American Ninja Warrior. She’s risen from training in secret to becoming a very public Challenger in this national pastime. As such, she has value to Lord Gargaron, whose training house she represents. Otherwise she finds herself a pawn in an ever-tightening web of power.

Jes must keep her rescued family secret and safe, herself alive, her General father from being betrayed and her lover Prince Kalliarkos from… everything. In this book, she makes her way into the countryside to rescue a lost sister, and ends up at the vanguard of a war. 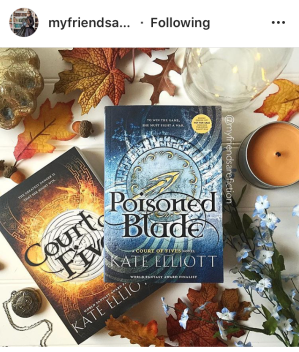 The world building of this series is as well done as any I’ve read. It’s intricate and exact, complicated in a realistic way. There’s racial and class tension, revolution and rebellion brewing, betrayal afoot all the way from the back alleys to the palace. It stops short of being melodramatic – this isn’t Game of Thrones – which keeps it interesting. And the characters have real impact: Jes is a weapon, whether she wields herself or must work for another.

I adore Jes as a heroine: she’s so normal and real. She’s refreshingly blunt – there’s no simpering girlishness here. She’s part soldier, part athlete, and those two have a lot of similar qualities. The rest of the cast is equally so. But in Poisoned Blade, it’s the intrigue that shines. Like the spinning rings portion of the Fives court, Jes isn’t the only player who must see the larger picture, and time their moves exactly in order to survive. The heartbeat of Book 1 continues to beat here: Everything is a game, and it’s always life or death. To win is to advance, but you must keep winning to survive.

Straight on to Book 3, Buried Heart!