Goodreads.com: Call Down the Hawk, by Maggie Stiefvater (Dreamer Trilogy #1)

I adore Maggie Steifvater’s writing. In her gorgeous prose, the language is art, flowing in surprising surges like over a waterfall. Call Down the Hawk is no different. In fact, there are times where she’s over-describing, where another analogy is far too much, but dammit it’s so good that no editor could bear to cut it. As such, I expected it was made to be read aloud. In the case of the Call Down the Hawk audiobook, I was wrong. 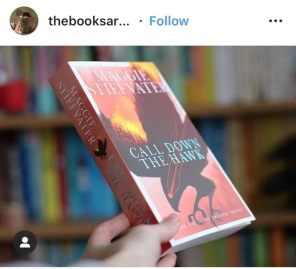 There’s more going on in one Maggie Stiefvater book than in entire series by other writers. I’m going to break my review down in parts just to make sure I get it all out.

The story: If you’ve got your brain even partially around the events of The Raven Cycle, welcome back to the surly, behaviorally-challenged ball of attractive anger that is Ronan Lynch.

Ronan is a dreamer: He can manifest something in a dream and bring it out with him, into reality. Great if you can make lunch. Bad if you make nightmares. Ronan has done both, and more. His father Neil was a dreamer, and it got him killed. His mother Aurora was a dream of his father’s, and she fell into eternal sleep when her creator died. Ronan’s other brother Declan works hard to be regular, boring – and tries to keep all of their lives that way. There’s one more Lynch, Ronan’s younger brother Matthew. Matthew is one of Ronan’s dreams-made-real, only Matthew doesn’t know it yet. In Call Down the Hawk, dreamers of all kinds face two enemies: themselves, and the fact that one of them will manifest something that ends the world.

The audiobook: It’s narrated by actor Will Patton. (You know, this guy from Armageddon.) His reading voice is fine, with an appropriately gravelly, Ronan-esque quality. But he struggles with character voices: they grate when he does them, and half the time he forgets to do them. Worst of all, his half-try at a British accent is excruciating. It’s a blessing when he forgets it, but it pops back up and yikes. Then there’s the British slang. They should have had him audition with some of that, then hired someone else. I assume he’ll narrate the rest of the series – which I’ll be reading in print, kthanksbye. 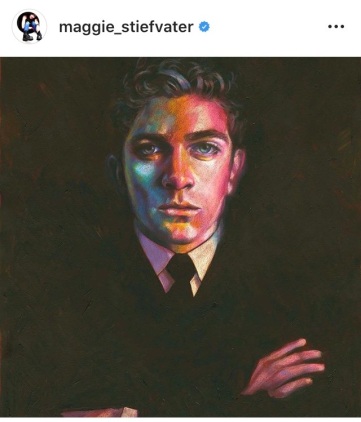 Ronan, Declan, Matthew: They’re so good. Tortured and conflicted and real and magical and extraordinarily well-defined as characters. They’re alike and vastly different in the perfectly imperfect ways of real people. Declan especially shines in this story: his self-awareness is so off the charts, he’s the boyfriend a self-help writer would dream into reality for herself.

Hennessy et al: In an excellent twist by Stiefvater of a dreamer’s power, Hennessy dreams copies of herself. Lots of them. And because she is a master art forger, so are they all. They’re a small lady gang of hot criminals who take turns pretending to be the same person, though they’re little, if nothing, alike beyond appearances. Again, Steifvater’s skill at drawing related people with complete individuality shines. Making them British might have been too much, though. The vernacular is clunky, and the added requirement certainly sank the audiobook.

Farooq-Lane and Parsifal, etc: This was a no for 80% of the book. They don’t appear that often; in fact, I forgot about their plot line twice. I guess they’re supposed to be annoyed (Farooq-Lane) and annoying (Parsifal), which they are. So well done, this bulk of their part annoys. When they finally become important, it’s worth it, I guess. Their plot gives big picture quality to the story – even though it doesn’t need any. I’d be perfectly happy with the Lynches and the girls solving what problems they have before this comes into play.

Lilliana: This mystery is a bit too drawn out; another story line left long enough I forgot it. But when it comes back, it plugs the holes in Farooq-Lane’s sinking plot.

Overall, this book is really good. It takes a while to sink into it, to get the rhythm coursing beneath the story. It’s convoluted but meaningfully so, dangling mysteries we can count on being solved. Just not in audiobook format, TYVM.