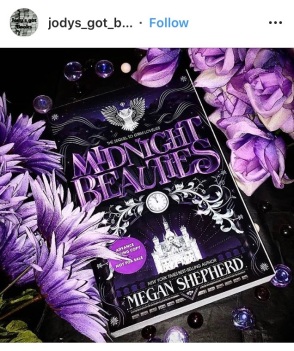 At the end of the first book in this series, owl-turned-girl Anouk finds herself bound into a magical betrothal and fleeing Paris in hopes of becoming a witch. Read it, if you want that the make sense.

Anouk barely makes her way to the Cottage, where a few hopeful human girls every year walk the Coal Baths – magical fire that kills basically everyone. Those who live emerge human-plus: a witch, like Anouk’s now-dead creator, Mada Vittora.

I won’t tell you if Anouk becomes a witch or not, but she obviously survives, and is still bound in a marriage promise to Prince Rennar. Together with Anouk’s squad of semi-qualified misfits, she and Rennar must force the rest of the magical royalty into helping them battle The Coven of Oxford – or something worse. A powerful dark magic has been unleashed on London and is tearing the city apart. 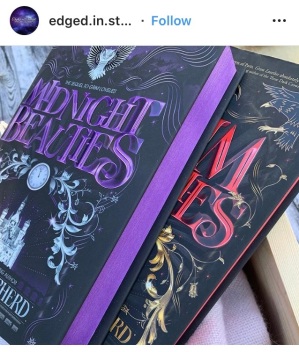 Midnight Beauties is better than it’s predecessor, Grim Lovelies, though everything moves so quickly it hardly matters. The action surrounding the coal baths could be more, but the book just wants to get past this stage, to the battle for London. Shepherd has a lot of fun destroying London: the dark magic has created time loops, insanity, animated dead, murder and mayhem galore. It’s a bit out of place in this cream puff of a series, but it’s probably the best part. Through this, our heroes must problem-solve and magic-capture.

More happens in Midnight Beauties, and that’s a good thing. But it’s all very convenient:  There are too many characters doing too many things, solving problems too easily, gaining desperately needed skills too quickly.  Challenges arise and are solved almost on the same page. Removing a few plot points and really digging into the rest would have helped the pacing, and my attention span. Still, it was an enjoyable read of an improving story, if still not very memorable.