New Year’s Resolution (same one I make every year): I don’t have to finish books I don’t like. This is why.

A secret underground library, accessed by clues and codes, that acts as an alternate dimension, and is both protected and threatened by societies of dedicated guardians? WHERE DO I SIGN UP?

Sadly, while The Starless Sea begins with this premise, it proceeds to deliver absolutely nothing.

This realization gutted me. I expected to adore this book. I certainly revere Morgenstern’s The Night Circus with all the respect its shattering brilliance deserves. But The Starless Sea is a book about magic that has no actual magic of its own.

Zachary Ezra Rawlins finds a book of short stories – and one is about him, as a child, though written ages before he was born. Again, excellent premise! Yet the writing plods so deliberately that it was already dull by this point. Hopeful, Zachary and I continued.

Soon, we were lost.

The story leads Zachary on a supposedly epic quest to… bore us to death with confusion and imagery and so little action that I started longing for scenes where a random cat showed up, though it exerted almost no impact on the tale. I mean, nothing has happened in 15 chapters, but it’s good thing I know that china plate is floral patterned! 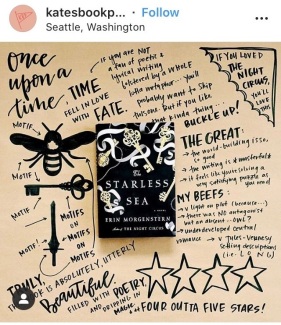 This reader loved it, click to read her thoughts.

If there was a bigger point here, I missed it. Hell, I missed any point to this book at all. Sure, I want the fictional worlds of the books I love to be real. But this world is terrible. It’s meant to be a dazzling web of intricately woven gossamer threads: fiction, fairy tale, fable. Each mysterious to follow, and tangled with so many others as to require delicate teasing out to continue following the story. An homage to the choose-your-own adventure books it so constantly references. Instead, it’s just a giant, soupy, tangled mess, hopelessly knotted together and half-melted into ruin.

On audiobook, The Starless Sea is 15 CDs long. I was ready to turn it off by disc four. My love for The Night Circus, and complete bafflement at how this could be so interminable and lifeless, kept me going. There had to be something, right? RIGHT??

There was not. The end. Never say bee, key, or sword to me again.

My one star rating may seem harsh; sure, there were lovely descriptions, careful word choice, blah, blah, etc., but no. When my expectations are high – excellent writer, outstanding premise – so is my disappointment. Morgenstern can be so much better, and I’ll be back when she tries again. At least for the first few discs.

One thought on “Review: The Starless Sea”

I'm Shannon. I visit the bookstore and library to be near the books. That's either very weird, or you get it. (I hope you get it.)

These are my thoughts on books, life, and other stuff. I'd love to hear what you think, and - most importantly - what you think we should all be reading.

Follow Love in the Library on WordPress.com
The Bibliophile Empress