Spoilers ahead, as the second installment of The Thousandth Floor series is as good as the first.

Goodreads.com: The Dazzling Heights, by Katharine McGee (The Thousandth Floor #2)

If you haven’t read The Thousandth Floor, go away now and come back when you have! 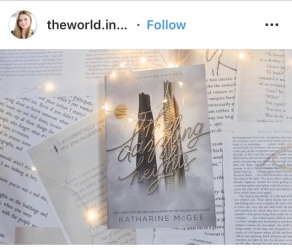 The Dazzling Heights picks up immediately where Book One left off. Eris is dead. The first and only person to ever fall from The Tower, and 1000 floors up from a secret outdoor access in Avery’s apartment that no one even knew was there. But she didn’t fall, of course. And only Avery, Rylin and Watt know that enraged, drug-fueled Leda pushed her.

Eris has secrets of her own, revealed in Book One. Some of which her friends are just learning after her death. Among them are Eris’ family drama, money issues and drastic down-tower move, plus her secret low-floor girlfriend Mariel, who is very suspicious about the fall. 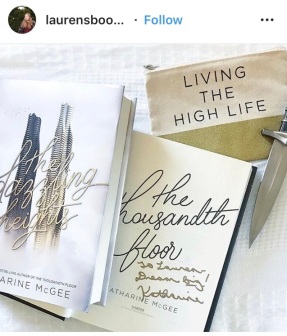 Also suspicious is Leda, now fully drug addled, and blackmailing Watt into super-spying on everyone who knows she pushed Eris. Paranoia swirls, friends drift apart. Avery is trapped in a secret relationship with her adopted brother, Rylin falls in love with the guy she steals from who promptly dumps her. McGee keeps all the plates spinning without self-indulgence; each character gets just enough page time. They fit together and exist separately; the world expands. There’s a full range of emotions, and I really enjoyed (if not liked) every character. Their motivations were complex but clear, and believable. Not a trite plot device in sight.

The second act finale is set around another Tower: the launch party for Avery’s family’s new, sky-high property in Dubai. Everyone ends up there, secrets wrapped in luxury, all coming to a head with another life on the line. It’s solid and surprising action that had me excited to jump into the final book right away.