Something’s about to happen… so let’s skip that, jump over here, and kinda fill you in later, okay?

In the land of Fennbirn, the Queen is always one of a set of triplets. Not the oldest, nor the smartest, just the triplet left when the three of them are done murdering each other. Dark, eh? I like it. Each triplets possesses a power that links them to one of the island’s clans: elementals control elements (well, okay), naturalists control nature (duhh), and poisoners can ingest poisons. Whew. It was getting a little clunky there. 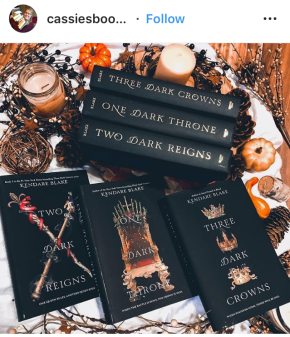 This generation, your options are Mirabella, an extremely strong elemental; Katharine, a weak poisoner (whose name is pronounced Katarine, without the h, for some reason), and Arsinoe, a completely powerless naturalist. Three Dark Crowns picks up as they are coming of age and into their  ascension year.

There are good things about this book. The powers (or lack thereof) and their impact on the world are well drawn. Mystical Fennbirn’s politics are interesting, both internal and in the strange “king consort” relationship they have with the nearby mainland. Each Queen is appropriately likable and complicated, her companions comfortably written.

[SPOILER ALERT] Perhaps the plot’s best point is that there’s no clear bad guy, if you will. Instead, the Queens are resigned to their fates: kill or be killed. Low-powered Katharine and zero-horsepower Arsinoe have the self-awareness to expect to die. Of them all, Mirabella’s expected to revel in her power with bloodthirsty ambition, but she doesn’t. What a nice change from the one dimensional villains of most books.

Where Three Dark Crowns fumbles is in showing action. We get all the lead up to important things happening, and then Blake cuts away from the action to check in on another story line. When we return, the action has passed – as is not always detailed. We’re left to assume things: What happened on Billy’s whole visit to Katharine? We only see one dinner. What happened when Joseph and Mirabella met in the forest at Beltane? We only see the first moments. It’s strangely disjointed and unsatisfying, as if Blake got tired and just skipped these parts.

There’s also an element of extreme randomness to the story. For example, Mirabells pulls a drowning guy out of the ocean and, like, immediately has sex with him. There’s no indication that Mirabella is a total floozy. (It’s repeatedly pointed out that her BFF Bree is the loose goose, while Mirabella abstains.) If I was supposed to get some sex-and-death, love at first sight, Ariel-and-Prince Eric vibe from that scene, it failed. This kind of conveniently random, no-anchor activity pops up a few times.

Overall, I enjoyed Three Dark Crowns. I think it could have done with another edit: picture someone writing What happens here!? in the margins. If those were filled it, we’d be looking at a 4-star book. Perhaps the second installment, One Dark Throne, gets the extra measure of love.