Scythe is quite the unique meditation on death, while at the same time using some really dull elements in juxtaposition.

Goodreads.com: Scythe, by Neal Shusterman (The Arc of a Scythe #1) 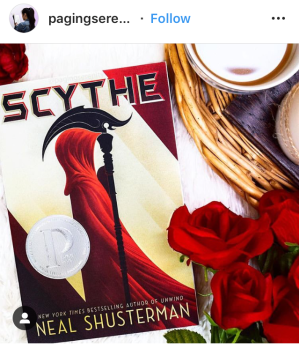 Citra and Rowan, through separate and unplanned acts, prove their mettle as teens and get selected to apprentice as Scythes, the necessary and above-the-law grim reapers of a future in which humanity has conquered death. To keep population growth in check, final death is doled out at will by this ordained society. It is the only sliver of mankind not directed, bound, and rules by the all-knowing AI super intelligence called the Thunderhead.

Of course, they don’t want to be murderers. But that’s the rub – no one trusted with death in this post-modern era should want it. Instead it a cross to bear for the good of the world.

Fascinating stuff there, as Citra and Rowan’s initial reactions to the idea change with their appreciations for the necessity and position. What else is there but death, in an immortal world? And what entity, even a superhuman one, could govern such a thing?

Of course, there are scythes who see themselves as “new order” – and they’re just murderers. Obvious psychopaths given charge blanche. This is the book’s big duh element. Scythe Goddard and his sycophants are too brash and cartoonish – manipulating their influence, throwing lavish parties, taking out office buildings with flamethrowers. Never are they actually scary, and what little internal conflict they’re given is weak at best. They’re paint-by-numbers bad guys in a story that deserves better. For every interesting thought the good guys have, the bad guys do something emphatically dumb. They need more texture to truly serve as foils to the book’s greater themes.

The idea of the world ruled peacefully by computer is more interesting. The Thunderhead provides for all, takes care of all, has perfectly calibrated the world to serve all those to whom it has granted perpetual life. Shusterman touches a bit on the repercussions of such endless existence: what does the soul seek, if it never need run out of time? Can it maintain inertia, if not enthusiasm, endlessly? The possibility – and inevitably- of “stagnation”, as Citra comes to know it, is the most compelling, and least considered, aspect of Scythe.