I love series that spin-off internally, then allow the characters from multiple books to encounter each other. I don’t mean dusting off Jace & Clary every time a different Shadowhunters book needs some spark, or promising Percy Jackson whenever a demigod story start wandering afield. This only works well when done in a short time frame inside the storyline, where the characters from the past book are immediately, integrally necessary. Aime Kaufman and Jay Kristoff did it perfectly in The Illuminae Files. It must be Kaufman’s specialty, because it’s done just as well again here.

Jubilee Chase is a soldier on a shitty, partially developed planet called Avon. Her military protects the terra-forming operation trying to raise Avon beyond barely habitable. The locals are alternately pissed that terra-forming hasn’t worked and pissed that anyone’s still there trying. Some of the more belligerent locals join the swamp-hiding, guerrilla-fighting rebels.

Some rebels, of course, have hearts of gold. Young Flynn Cormac is the voice of reason. Yet as Avon seems likely to fail an upcoming planetary review, his influence wanes. He takes matters into his own hands, hatching a plan to find out what – or who – really keeps Avon from becoming a viable home.

As with These Broken Stars, the story is straight sci-fi. Avon is a failing experiment, a war zone of advanced vs. outdated technology. The “Whispers” Lilac and Tarver met in the 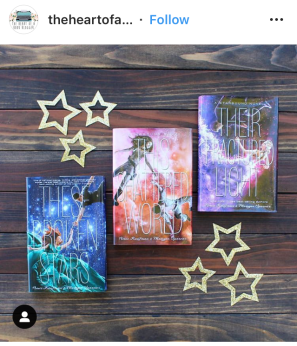 first book, energy-based beings from another dimension, give the series an almost paranormal element – and perfectly demonstrate how we, the readers, can only define these aliens in the same way our lead characters do. We’re all wrong. This Shattered World takes us inside the life Tarver led before the Icarus crashed, shows us how he learned to survive.

Jubilee is far more fun than Lilac as a heroine, because she’s practically Tarver: all action. Flynn is the gentler one, the brains behind the operation. The two become unlikely allies as they begin to discover, as Lilac and Tarver did, that LaRue Industries has a hand in every corner of the galaxy. They each betray their causes for a higher one, and for each other, in the process.

A past connection between Jubilee and Tarver brings him and Lilac seamlessly into this story. The events of Book 1 move the events of Book 2 forward. It’s perfect math, an equation you know will be solved in the series’s last installment, Their Fractured Light. Jubilee and Flynn learn what Lilac and Tarver did: to trust each other and their allies, and to distrust everything else. They’re a motley, perfect team.