At the end of Mortal Engines Book #2, Predator’s Gold, Anchorage makes a stunning escape from Arkangel, and Tom, Hester, and friends survive a perilous frozen crossing to America. Infernal Devices picks up 15 years later, with Wren Natsworthy, Tom and Hester’s daughter, chafing against the confined edges of her safe, small life aboard Anchorage-in-Vineland. Having never known the harrowing world of the Hunting Ground, she doesn’t understand the complacency of Anchorage’s adults. She wants adventure in the great wide somewhere.

The past returns to haunt, this time it’s after Caul. Former Lost Boy and enamored of Freya, Caul is a loner and tinkerer ill at ease aboard his stationary home. It’s him they seek when adventure arrives from underneath – Lost Boys, in a submarine, sent by Uncle from Grimsby. Caul declines to help, but Wren sees her chance. All she has to do is steal the item the Lost Boys came for: the mysterious Tin Book. 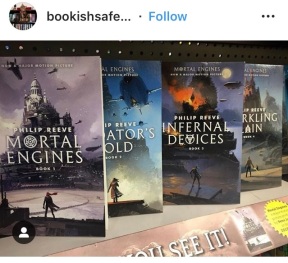 No story element makes me more nervous that the generation gap. Just because we loved a parent in a story in a world, doesn’t mean we’ll love their kid. Not all stories can evolve. (I’m looking at you, Keira Cass, for that The Heir garbage.) But Infernal Devices is a worthy successor. Wren is a perfect combination of her parents, raised on and romanticizing their adventures. She’s easily understandable. Tom and Hester have aged perfectly: still their own stark selves, softened by age and safety.

The story is a whizz-bang: The Lost Boys are discovered, Wren is kidnapped onto the very sub she wanted to board. She and her captor, a small boy named Fishcake, stumble into a brilliant plot point: the raft city of Brighton, which lures in Lost Boys to enslave them. Who’s the mayor? Pennyroyal! The gang is all here. Wren also meets a boy named Theo with an important Anti-Traction League story to tell.

Everything about this book is great. The settings soar, the plots are twisting and diabolical, but always palatable and easy to read. Wren’s peril is real, but still fun, and Tom and Hester are launched back into the roles we loved best. Politics, war, adventure, escape – it’s all here, as good as ever.

One thought on “Review: Infernal Devices”