The magic in this book is so damned cool, and I did not see that twist coming.

Goodreads.com: Traitor to the Throne, by Alwyn Hamilton (Rebel of the Sands #2)

Amani, the Blue-Eyed Bandit, djinni, and rebel of the sands, is once again our heroine in this dusky desert adventure. It opens with Amani and her friends, including Prince Ahmed, regrouping after the near-death escape at the end of Book 1. Their aim is still to overthrow the Sultan, and put Ahmed on the throne of Miraji.

I love the nuance of the magic in these books. Amani finds herself captured and ensconced in the Sultan’s harem – not as a wife, but as a combination weapon and toy. Her djinni nature is known. As the demigod child of a Djinn, Amani cannot lie. But author Alywn Hamilton never crafted this as a simple power. Rather, Amani cannot lie. If something is untrue, she can’t say it at all. (She repeats, “Jin is alive” to herself and knows that simply because the words formed, that it is true.) But is also means that if Amani says something that hasn’t happened yet, the universe will rearrange itself to deliver on that promise. She can change the course of the world with her words. Perhaps only djinni know this, as no one ever seems to use it against them. But the implications of such a power fascinate me.

In the palace, Amani works both for and against the Sultan. He places her in meetings to tell if others are lying. She serves as an inside man for the Rebellion. People from her past surface, the Sultan having twisted many to his whims. They hatch a wild plan to take down the Sultan – only to find he’s planned something more wild of his own. Capturing Djinn, actual gods, and enslaving them as soliders who cannot die. 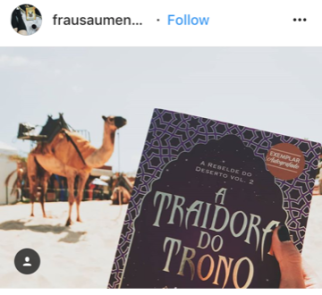 Usually, the politics of fictional worlds bore me. It all looks like:

[Evil, cruel ruler] vs. [scrappy, attractive, ‘one in a million’ rebel] and [similar but slightly less talented friends] in a fight to control [post-apocalyptic trash world or festering, full-time Renaissance Faire].

But Traitor to the Throne pulls politics off. Amani and the Sultan have a mentor-ish relationship; he doesn’t try to persuade her as much as educate her to the reality of the world she’s trying to change. His reasons for not wanting Ahmed to rule actually make sense. They cause Amani real doubt. While she’s smart enough to sort it all out, I found the intelligence and respect of this dynamic very refreshing.

So why only a 3.75? I didn’t race through the book. It satisfied in a steady, contemplative way, but I wasn’t tearing pages for turning them too fast. In fact, I went away for a few days and left the book behind, the last two chapters unfinished! I was curious, but not quite compelled.

Of course, the end delivered a whizz-bang of a twist. I “what?!“-ed out loud. I guess that serves me right.