Oh my GOD, stop getting away just to get caught again!!

Goodreads.com: The Death Cure, by James Dashner (The Maze Runner #3)

The end of The Scorch Trials is so whaaaaaaa? that I was actually quite intrigued to start The Death Cure. The second book is nothing like the movie – don’t watch them in succession, and then read this book, it’s too confusing. But I’ll try to remember what happens. 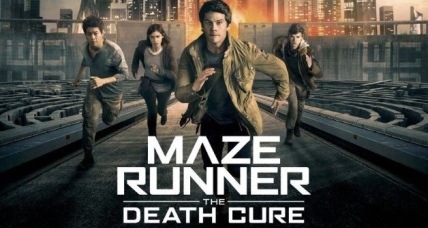 The Death Cure book: Thomas and co. reach the so-called “Safe Haven” to find out that – surprise! – it’s not. Apparently they haven’t read the first two books. Forced to flee again, two groups of Immunes are parted, and separately they all head for the walled city of Denver.

This Denver is a cool setting: a city desperately trying to protect itself and carry on while a highly contagious plague roils outside. They’re not immune, just not yet infected. And they hate the Immunes for their invincibility. Denver is post-apocalyptic in a cool way; it’s embraced martial law, but people go about their lives as best they can. Too bad the Flare is already inside.

The Gladers get captured and escape about every 10 pages. This trend was tired in book two, and it’s worse now. For an organization bent on controlling the world, WICKED couldn’t catch a snowflake on its tongue. Yet their secrets are finally coming to life – they need the Immunes, specifically Thomas, to complete their mission. 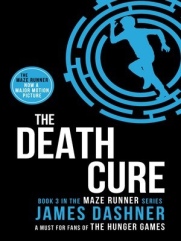 I won’t spoil it for you, but let’s just say the bad guys don’t quite win. (Nor does the writing improve. Nor does Dasher figure out how to make Thomas’ interest in a girl any less random than spaghetti thrown at a wall. I could go on.) But in a world that’s truly decimated, existing just to await it’s own obliteration, there’s really no victory. That’s the single biggest them that gives value to The Maze Runner trilogy. There’s no coming back, no success that returns Earth to what it was. It’s a compelling plot line even when those around it are weaving all over the place.

The Death Cure movie: As expected, this movie is barely based on the book. You know it as the film opens with a train heist. Yes, really. The train is carrying the Immunes still held by WICKED, and the remaining Gladers steal some of them back. It’s a cool sequence, too. It’s just from some other story. 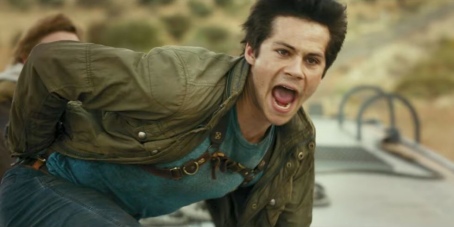 “I don’t remember this from the book!”

“This movie based on a book?”

The crew heads for “The Last City”, home of WICKED HQ. It’s no longer Denver, because they’re coming from a derelict seaside somewhere. Despite all precaution, the Flare virus is getting in – and pretty soon, there won’t be anyone left to try to cure it. 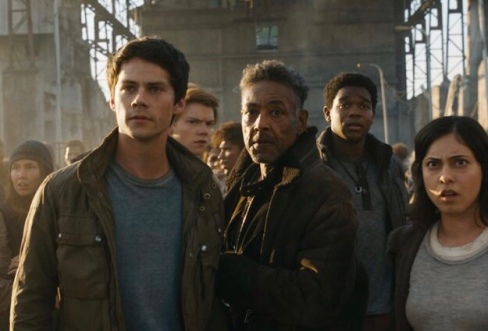 Why You Need a Publicist with Photo Approval: The Brenda Story

By far the best part of this project is the young cast. Dylan O’Brien (or as I think of him, “action Logan Lerman”) is definitely a leading man. Pray he doesn’t get offered a superhero movie. (Side note: I loved American Assassin, and I don’t care who disagrees!) Everyone loves Thomas Brodie-Sangster. (Rhythm is is life, guys!) There are a few scenes with, “It’s that girl you like!”, as my husband calls her – meaning Katherine McNamara, who I don’t really like on Shadowhunters, but I do love that show. Hell, Death Cure even gives the girl who plays Brenda something to do, and she has a lot of fun. And more hair, thank heaven. 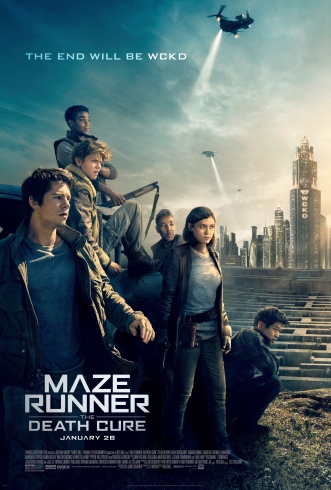 Yet the movie is just okay. Some parts of it are better than the book, though I still don’t understand the point of changing it so drastically. Without spoilers (those come later), the whole Newt thing is very different and less emotional. There’s no Hans character – someone else does his work, someone who is apparently both a doctor/research immunologist and also a child. Have we forgotten these are kids? No explanation offered, and none needed, because who cares? Boring-ass Janson shows up in every scene to remind you it could always be worse. (That Littlefinger guy will never play a likable role.) Not satisfied with the train heist, there’s another aerial rescue thrown in.

And then the biggest change: do they find a cure? The answer is opposite from the book, and a dull, ham-fistedly obvious thud of a plot point that’ll make you want to facepalm.

Still, like the past two films, the end of The Death Cure is a cleaner version that makes more sense. The speck of benevolence that didn’t belong at the end of the book is removed, in favor of the same thing just happening because it makes sense. The only nod toward WICKED being good, toward the humanity they claimed to want to save, is given to character, not to circumstance. It’s a smart move, and it works well enough. But the changes from the book haven given the movie a different moral crisis, and that is never addressed. 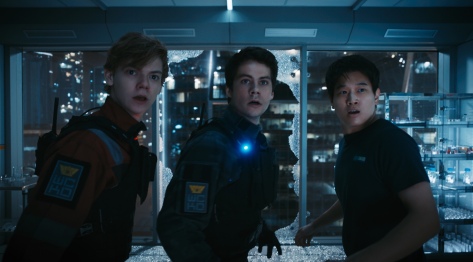 They just saw a bookshelf full of The Death Cure paperbacks.

(SPOILERS: Seriously, stop reading.) If Thomas himself is the cure, wouldn’t he feel bad? In the movie, Brenda says, “You can’t save everyone.”, and Thomas answers, “I can try.” Well it turns out, after all this, he could actually havesaved everyone. He didn’t know it then, but he does now. And the Thomas you’ve spent three books and three movies with would never just plop down at a beach party, happy to be immune, while the last of the world burns. (Please watch the CW’s “The 100.” It’s all this, and incalculably better.)

Overall, The Maze Runner books and movies are pretty enjoyable, even if none of them are very good. Still, I’m glad to have contributed to The Death Cure‘s $23.5 million opening weekend, because movie success for one YA franchise means movie adaptions for more!

Either YA is evolving, says Forbes.com, or it’s at death’s door, says Collider.