My first reading challenge of 2018: two weeks to read all three Maze Runner books, and watch the first two movies, so I can go to an early screening of The Death Cure at work on January 14. No problem.

In the story, Thomas wakes up in a dark place with no memories. He knows things – what shoes are, what food tastes like – just doesn’t know where he remembers them from.

The dark place is an elevator, and it opens into The Glade. It’s a central square surrounded by towering walls. In it live about 50 boys, all without memories, who’ve built a makeshift farm community. Outside it lies the Maze. By day, they try to solve he Maze to escape, and also to maintain life in the Glade. By night, the walls around the Glade close, keeping out the bizarre and terrifying Grievers, half-slug, half-machine monsters that hunt the Maze.

The Maze Runner book: It’s pretty good.  You know right off the bat that the Maze is some weird human experiment, which is interesting. It’s presumably run by a government or corporate bad guys – also interesting. With memory wipes and hybrid animatronic creatures, there might even be science! Plus, Thomas is a likable guy. (It doesn’t hurt that he looks like Dylan O’Brien, amirite?) He knows he isn’t quite like the other Gladers, and his struggle to figure out how, and what to do with the info, is very genuine. The supporting cast are a satisfying mix of personalities, well suited to the roles James Dashner has assigned them.

For it’s compelling start (What is this place?), the first 50 pages are also really annoying. Call it the LAPD: Lazy Ass Plot Device. Thomas finds 40+ boys in the Glade, yet not a single person will tell him WTF is going on. They claim not to understand it either, but they’ve been there for two years! They know more than enough to tell Thomas what’s up. Of course they never do, and it drags and drags and you’re skimming and blerg. A big X for that crap. Luckily, Tom is pretty smart and moves things along.

Also, the Maze itself is not as clever as it thinks it is. (Or as I want it to be.) For all the build up, the eventual resolution is a little huh?, and the end is just unnecessarily weird. (For a similar idea done far better, read Incarceron by Catherine Fisher.) But it takes you right to the first page of the sequel, The Scorch Trials. Overall, I’d say the book is quick and fun, though it could have been really cool with a little more cleverness written in. (Similar fate: the movie ‘In Time’ with Justin Timberlake.) 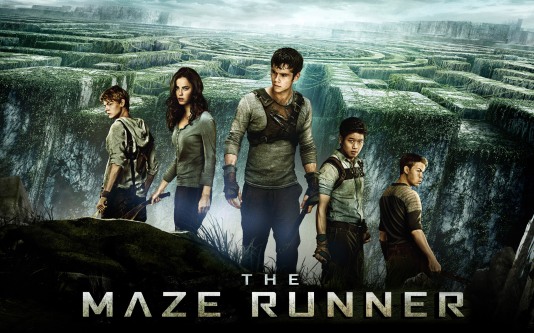 The Maze Runner movie: Pros: Dylan O’Brien, the Maze looks really cool, they managed to make Grievers scary (I was worried), the rest of the cast is also great. Cons: Dumps most of the detail from the plot, then goes really fast through what’s left. Most movies do. That strips the motivation from many of the characters and scenes. Still, you get the gist – and you’re much better off if you’ve read the book. (Sadly, the same LAPD is in heavy rotation in the movie, which annoyed the crap out of my husband.)

As always, many changes are made. Most notably: the end of the movie is better. It’s similar, but with significant differences. It’s still too simple, though it’s more clear and clever than the book. If whoever wrote the end of the film had given that idea to James Dasher to end the book, we’d really have something to talk about.

Like the book, The Maze Runner movie drops you on the doorstep of the next one. So on I go….