A bizarre and intricate near-horror tale, Lair of Dream proves The Diviners flapper-era intrigue can still sparkle in the dark.

Goodreads.com: Lair of Dreams, by Libba Bray (The Diviners #2) 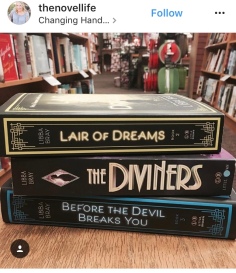 The best part about The Diviners #1 was the real world it was set against – New York City circa Prohibition, an era of black and white laws and very gray morality. In the second installment, Libra Bray expertly turns the story to examine the inner struggle between wanting and actually trying to have it all.

Evie O’Neill, Midwestern party girl heroine of The Diviners, has parlayed her object-reading abilities into that quintessential early 1900s sort of fame – a radio program. She’s the toast of the town, and the “Diviners fever” she sparked has lit many flames. Some real, some charlatan, Diviners ply their trades across NYC and beyond.

But not all Diviners want fame, and not all fame leads to fun. Instead of Evie’s glitzy glam, the real stars here are the secretly powerdul: dream walkers Henry and Ling, who can slip into dreams and there interact with the spirits – dead and alive.

The malevolent force behind John Hobbs in The Diviners still lurks just beyond human awareness . Henry and Ling battle to deadest his power in the spirit world while those awake fight his manifestations in the light.

Lair of Dreams is about many things: good and evil, selfishness and pride, the pursuit – and price – of happiness. Bray masterfully gives each main character their own unique, compelling struggles, both internal and external. As the action moves from Evie and Sam to Henry and Ling, from awake to asleep, there are no weak spots that make you want to skip ahead to your favorite character’s return. The B-plots here are all grade A.

Again, the flapper world is the perfect backdrop for Bray’s story: a time of unabashed hedonism, when problems could be solved by simply ignoring them in favor of a rollicking good time. Lair of Dreams let’s you experience the full breadth of  both, without making you choose.