My second DNF of the year. Goodreads.com: The Siren, by Kiera Cass 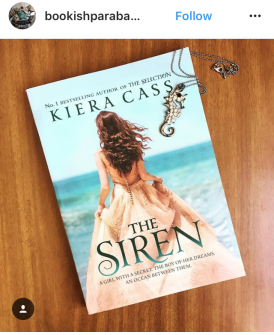 I enjoyed the first three books in Kiera Cass’s “The Selection” series – The Selection, The Elite and The One. They have an oddly appealing pretext, considering its misogyny, and the main character is a satisfying rebel. They are fluffy and fun. Then book four, The Heir,  arrived and INSERT POOP EMOJI. Eadlyn is a savagely hateable heroine in a story that should have been printed on toilet paper. It’s a shameless money grab, extending the series beyond its natural end simply for dollar dollar bills, y’all. (I didn’t read the last book, I had walls to stare at.) So Cass can go either way, and I was a little nervous about The Siren.

And rightfully so. I wanted to be wrong! I made it through the first 1.5 hours of The Siren on audiobook – and only because I was laying in the dentist’s office, literally, actually, physically undergoing dental surgery while listening. The book was better than dental surgery… but not much.

For much better twists on the siren myth, try Atlantia by Ally Condie and Undertow by Michael Buckley (it’s a subplot, but still A+).

It’s a cool idea: The Ocean is a living entity that needs to be fed. Sirens are her servants, young women whose very voices charm people to that watery grave. When they sink the cruise ship Kahlen is aboard, she pleads for her life as she sinks into the water. The Ocean hears, and the Sirens offer her a place among them: 100 years of service in exchange for life, and freedom when her indenture ends. The catch: Sirens cannot speak, except to each other. Any human who hears their voices will die.

Unfortunately, Kahlen’s a twit. The other sirens are worse. They live limited versions of human life, never speaking in public, only to babble moronically to each other in their apartment they share. If you die from hearing them talk, it stands to reason you’d die from reading them talk too. Of banality. It’s like a reality TV show full of airheads who murder people on the side. They’re the Real Housewives of Your Watery Grave.

Maybe the book gets better, and it’s my loss that I’ll never know.

Look, I’ve never written a novel. Far be it from my opinion to matter. But Cass has proven she good books in her! This just isn’t one of them. I’ll keep trying if she does.