Half of this book is really fun, and one part is even perfect. The other half is so face-palmingly stupid, so full of criminally insane decisions made by psychotic and reprehensible teenagers that Kill the Boy Band goes from a yes to a WHY???? right quick. 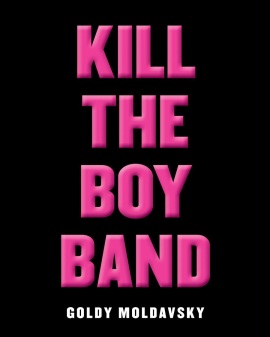 I had a lot of feelings about this one. It starts off with the 15-year old female narrator, who never reveals her name, joining three friends the same age for a semi-covert Thanksgiving overnight to NYC to stalk their favorite boyband, The Ruperts. The girls don’t have tickets for the band’s TV special performance, so the rich friend gets them a room in the band’s hotel.

Now, let’s be real. This was my IDEAL life for a while. I rarely got to do it, for lack of resources and location. But I would have. And I tried.

There are four Ruperts, and each of the four girls favors a different one. Far too convenient, as any reformed teenybopper knows. One of your friends always loves your guy, causing you to consider at length whether you’d invite her to your celeb-wedding and dance in her tears, or ban her for daring to think about your immediate-future-husband in such a way. Lines get drawn. 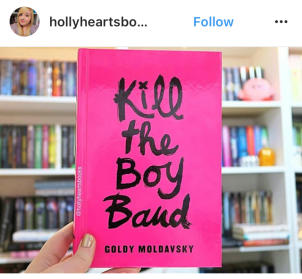 WHAT’S GOOD: There’s a part in this story where the narrator explains her fandom to an astonishingly predictable, too-cool, bearded hipster bartender. (I swear, do these characters come in cans?) I digress. It’s the best part of the book: this girl explaining that she loves, cherises and obsesses over the Ruperts simply because it makes her happy. And while masses of girls feeling the same euphoria may seem terrifying and mindless, why would someone want to crush the sincere joy of a young heart? It’s applicable to any fandom you’ve ever joined, any ship you’ve ever rowed. Clearly the author was a fangirl herself and some point, and she remembers it fondly.

WHAT’S NOT (spoilers from here on out): The girls meet one of the Ruperts. An astonishing string of moronic actions and decisions follow, so dumb that the author barely bothers trying to justify them. The whole story just slides off its cone like sad ice cream. Rupert P (the least popular, natch) ends up prisoner in their hotel room, the victim of mild sexual assault, and then, as the title promises, he gets killed. 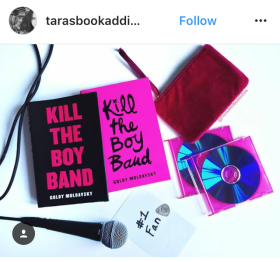 The narrator has the weakest, sorriest excuse for a conscience in the history of emotion. She barely objects, and goes along with every asinine thing anyway. The other girls actually have no clue they are clinically psychopathic. They’re written so poorly that I feel bad for them not because they’re crazy, but because they’re one-dimensional tripes with serious mental health issues. And not in a funny way. (The police are apparently no better, as seemingly no one investigated a high-profile death that would have left clues all over a hotel.)

Overall, Kill the Boy Band starts with a fun, frenetic energy that sweeps the reader up into the same sugar high the teen girl characters feel, zipping along like bubbles in the story’s bloodstream. But then there’s a metaphorical stabbing (not the mode of murder actually employed), and Kill the Boy Band bleeds out quickly, soaking everything in ruin. It ends up just a scary stain on the carpet.