Maggie Stiefvater does what she wants: takes the regular world, shakes some magic on top, and drops you into the middle of it with little explanation. What you get out of her books depends on how well you read, and those who read closely are well-rewarded. I

loved Kate (Puck), the plucky heroine, just as much as I loved Sean, the inscrutable hero. They carry equal weight in the story, like two pillars of the very island they both love and honor.

The Scorpio Races tells the story of an almost-mythical island called Thisby (near the UK, presumably), where wild, bloodthirsty horses emerge from the ocean like demon spirits. Those brave or stupid enough to capture and ride them compete in Thisby’s only event: the Scorpio Races. Tourists come from lands beyond, including America, to whip the tiny island into a few weeks of notoriety and, more important, profitability. But none on Thisby, or who visit, can forget: the capaill uisce are deadly.

Kate Connolly is the only girl in a family of three orphans left behind after capaill uisce kill her parents. When her older brother decides to seek his fate on the mainland and the landlord threatens to repossess their home, she makes a desperate decision: to become the first girl to ever ride in the Scorpio Race, and to do it not on a water horse, but on her own horse, Dove. Sean Kendrick is a moody, intense local boy with a gift for horses and zero people skills. He’s won the race four years running, on the capaill uisce of his heart (but not his ownership), Corr.

What follows is a truly thrilling story of scraping by, eeking out a life in a place with little to give, bravery and courage, and defining family. I wasn’t the young girl obsessed with horses, but The Scorpio Races is a love story to their kind, and perhaps to the bond between any human and their true animal companion. It also speaks well to small town people, treating each other with respect or prejudice by turns. It’s lyrical, violent, lovely and bittersweet.

Capaill uisce hail from a Celtic/Scottish folklore. Steifvater makes a note about the story’s origins in her author’s note, but after The Scorpio Races, I found the mythology less compelling that her version of the story.

It’s hard to decide which of these cover images I hate more (including the one above). None evoke in me what this book did: Stiefvater’s signature blend of eerie and odd, modern mythology ripe with subtle longing not just for young love, but family, identity, place. She’s a powerhouse, this book is truly unique, and neither of these covers makes me want to read it.

The first image can only ever belong to the movie poster for Spirit: Stallion of the Cimarron. (Main voice by Matt Damon, music by Bryan Adams. That’s me all day long.) 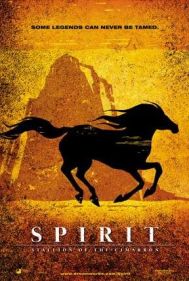 The second cover looks like a story about a 12-year old girl whose parents can’t afford a horse, so she holds secret bake sales to raise money. A rich lady, who long ago had her own horse, pays the girl $250 a cupcake, and at the end of the summer, she buys the horse – and names it Cupcake. (Hmm, I might read that book.)

In September 2015, Variety reported that Focus Features was making The Scorpio Races movie, with writer Matt Sobel tapped to direct. It was originally optioned by Warner Bros. in 2011. I see nothing about it since then, has anyone heard?