I don’t usually binge-read a whole series, if I’m lucky enough to start it when all the books are out. I try to pace myself, allowing each book to stand alone a while as I digest 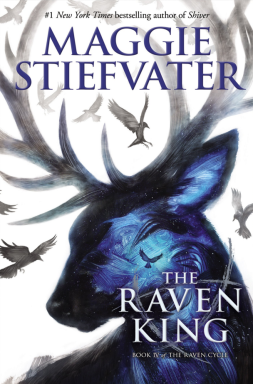 that portion of the story. No such luck with Maggie Stiefvater’s The Raven Cycle.  I didn’t review them in a row, but I could not stop reading them that way.

The Raven King is the ultimate installment in one of the most unique and creative YA series I’ve ever read. I’m going to spoiler all over the place here, because you shouldn’t review a review of Book IV unless you’ve read at least the first three!

First, Blue and Gansey, one of the most delightfully low-key, natural ships I could ever row, finally fall into the inevitable, comfortable pair they were meant to be. MY HEART. It’s just a hair more satisfying than the surprise of Adam and Ronan (of all people), who prove two messes can make a clean-ish slate. Odd and incredibly satisfying sweetness. And those are just the love lines.

The Raven Cycle story was never predictable, not for a page, and the last book holds ever more surprises. Did you think mythical Welsh king Glendower would be as promised? No, sir. Even a centuries-dead character, known by decades of research, is nothing like expected. Gansey finds his man, Ronan and Adam fulfill their powers, Blue holds them all together and the world of magic they half-found, half-made shudders and swirls around them.

I enjoyed this series immensely. Every theme, from money to family to love, to hope and expectation and despair, is finely woven into a web of magic stretched over an entirely real, believable world. Truly an achievement, The Raven Cycle will make you wish you’d written something this good.

Now, we wait for this Ronan trilogy…. #HURRYPLZ

One thought on “Review: The Raven King”