It’s hard to revisit to an established fictional world. That first story, when the reader (and often the main character)

learns everything has all the elements of surprise and wonder, the journey of discovery that makes you fall in love with a place. Go back again, for a new story, and the setting can feel tired. Fantastic Beasts may be good, but it’s no Harry Potter, you know?

I love the world of the Shadowhunters. The Mortal Instruments was a great series, and I was truly surprised by how much I enjoyed The Infernal Devices. (Steampunk Shadowhunter historical fiction? YAAAS.) Then I made the mistake of trying Tales from the Shadowhunter Academy and The Bane Chronicles. So when I say Lady Midnight has good and bad points, I mean that it’s better than the worst, but not nearly as good as the best.

Everything in this story is quite obvious. The Shadow World works in exactly the way you understand. Emma Carstairs and Julian Blackthorn, the brave and selfless kids planted at the end of The Mortal Instruments like a flag marking a spinoff series, arrive as just that.  In this story, Emma loves Julian. Julian loves Emma. Thank God the now 17-ish year olds made the mistake of becoming parabatai as kids, because it’s pretty much the only interesting thing about them. Emma is obsessed with finding the true killer of her parents during the Dark War. Julian is Mr. Mom to his younger siblings, as their parents

are also dead. It’s like two Disney movies with sad beginnings run out of budget and have to be combined. They live in the Los Angeles Institute, which is basically a supernatural boardinghouse with almost no supervision. It’s “Bedknobs and Broomsticks,” without anyone as fun as Angela Lansbury. (If you have no idea what I’m talking about, go here.)

Emma, Julian, and Co. embark on a convoluted but interesting investigation to solve a rash of murders that appear to be linked to a cult, and to a ley line. (Another minus, this one of timing: I listened to this audiobook while I was reading The Raven Cycle, which has a very important ley line component. And tarot cards! And is much better.) This mystery plot is solid, though it plays a distant second to Emma and Julian worrying about Emma and Julian.

I don’t love that Clare’s newer novels trot out old characters for guest appearances. It makes sense that Jace, Clary, Magnus and others would still be part of the world, but their pop-ups don’t knit the stories together. Instead, they remind me that I wish I were reading The Mortal Instruments over again. 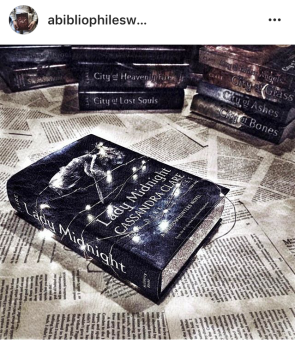 claimed by The Wild Hunt at the end of the Dark War. Now Mark is back, secretly, and he’s a tangled mess of PTSD, lust and humanity. This should have been the main plot of the book, then I’d be writing a different review. The second best part is Ty Blackthorn’s undiagnosed autistism, for the way his family protects him without coddling him, and the unique contributions he makes to their work.

Overall, I didn’t connect with Lady Midnight. I hate obvious plot points announced at the beginning of a story that tie you to their cart and drag you through the story. “I love him/her but can’t tell her/him!” for 350 pages. “I must pretend I don’t love him, so he’ll stop loving me!” on and on and boring and so forth. Yet there is a moment at the end of this book that made me say, “UGH, NOW I HAVE TO READ THE NEXT ONE.” It was a bright, thrilling moment, and a fartnoise, all at once. But, butbutbut, if it’s good, it will be so worth it.

Spoiler time: You know I’m talking about the very end, when Emma asks Mark to lie and pretend to date her. (That is SO LAME and moronic, Emma. For a smart girl, you are being a turd.) Then Mark saves the day/book/series by getting all racy-fairy and asking, “Why lie?” Indeed Mark, indeed.

Book Two in the series, Lord of Shadows, comes out May 23. I won’t be running to grab it, but I will read it eventually. I’m bummed the audiobook of Book Two won’t again narrated by Morena Baccarin. I never watched Buffy, but the Joss Whedon theme continues, as it’ll be read by James Marsters.