I’m not particularly interested in “regular” magic, the kind done by seemingly normal people in the normal world. I need an alternate reality backdrop, like Middle Earth, or at least a parallel reality like Hogwarts. Otherwise it’s too “The Craft” and day camp Ouija boards and when we all pretended to read Wicca books in eight grade. So The Graces isn’t my usual thing, but the cover art was so pretty I had to give it a try. 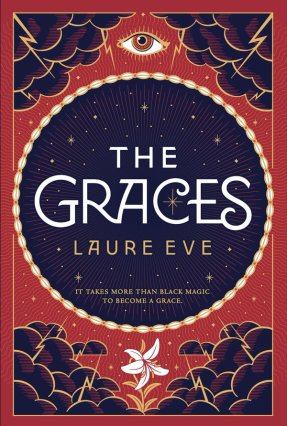 It’s the story of River, new to town and school, after her father abandons her and her mother without a word. She finds her new school ruled by the mysterious Grace siblings: fraternal twins Fenrin and Thalia, and younger sister Summer. They are the local Cullens – aloof, otherworldly – but they mix more: Fenrin dates, their mother owns a local apothecary. And Summer rebels by telling people what everyone already thinks: they’re witches. Between local lore and an unexplained incident at the twins’ 8th birthday party, the town is rife with suspicion and awe over the Grace family.

River needs to become friends with them – needs to become one of them, as she tells it. It’s more than just a desire for popularity, but because River doesn’t admit a reason for her fixation, this part of the story feels forced and overly dramatic, simply to drive the action. River proceeds unexplained, calculating desperation and, as such, it’s predictable when she manages to fall head-over-crush for Fenrin and actually befriends Summer, becoming part of their exclusive world.

River is grateful to breathe the Graces’ rarefied air, but anxious for who-knows-why to get on with magic. The Graces, by comparison, are the least witchiest witches ever written. They don’t do much magic, and it’s questionable if they do try even works. That could be because they have no power, or it could be their family secret: the Graces are cursed. According to it, any non-witch who falls in love with a Grace will suffer madness or die. This is one point the story’s magic feels real and immediate: Thalia let things go too far with a local boy, and now he’s dangerously obsessed.

This is where the story uses a tough device: the unreliable narrator. Said unreliable person, whose head the reader has been in all along, suddenly surprises by revealing they weren’t telling the truth (or not the whole truth) all along. River, who’s dropped a hint or two thus far, suddenly turns into a pathological liar.

The unreliable narrator can be used to good effect; here, it gives some backbone to River’s “need” to become like the Graces. But she uses it so often, mystery quickly turns manufactured. River knows why her father left, she saw what Fenrin did, she remembers what she said at the cove – but doesn’t tell the other characters, and she doesn’t tell us. Sparingly, the unreliable narrator can drive drama, twist plot and surprise. Used over and over, revealing a new mystery before answering the last one, it feels contrived.

That’s a shame, because the twists are ultimately unique and very satisfying. Without specifics but still SPOILER-ish: River is the one with the power. She has always had it, and far more of it than the Graces could dream. Most importantly, River is not surprised by it. Is this a great example of unreliable narrator, whereby River knew all along she what power she had? Or is this her character maturing, accepting, looking ahead?

That question has me looking forward to a second installment of the series: River can’t lie if she doesn’t know, and past the end of this book’s plot, characters and readers alike should all be on new ground.