I tore into this audiobook the moment I finished A Court of Thorns and Roses. The first installment left a fairly neat package, having saved the human/fae day, if not their whole world. (I hope that’s not a spoiler, since the fact there is a second book alludes to some resolution. If you disagree, I’ll put such comments behind the jump in future posts!)

Goodreads: A Court of Mist and Fury, by Sarah J. Maas (A Court of Thorns and Roses #2)

A Court of Mist and Fury opens on Feyre and Tamlin, along with Lucien and Alis, safely ensconced back in the Spring Court. Too safely, it is quickly revealed. Tamlin, after nearly losing everything, has become an overbearing protector. Feyre survived her prison ordeal under the mountain only by SPOILER, and more than chafes when Tamlin’s protection becomes akin to house arrest. Each bears scars from the first book’s legacy that are deep and continue to bleed. Maas delves into Feyre’s darkness with stabbing accuracy, charting the steep rises and falls of her panic. The panic triggers power. Feyre’s new powers are unforseen and unprecedented. The story tumbles forward almost wildy until Feyre finally loses control. 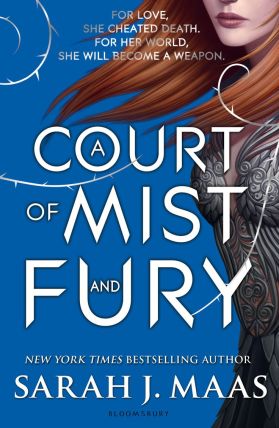 And her savior is no surprise. Rhysand (now infuriatingly pronounced “Ree-SAAAND” by the same narrator who thought “Ree-sund” was fine in the first book), navigates some intricate fae laws to kidnap – or is it rescue? – Feyre. Maas instantly throws the magic over the reader: she loves Rhys, loves to write him, and it shows. Only now the reader is in his world. The Night Court is as twisted and terrible as the fae people believe, while also as layered, heartbreaking and wonderful as the reader has suspected/hoped all along. If you were Team Tamlin before, this new Team Rhys is out of that league.

Short story of the plot: War is coming. Rhys and his friends, who suffered in their own way while he was locked away 50 years with Amarantha, stand as the voice of reason in a world struggling to get back on its feet. Feyre has become an integral part of not only their plan, but their lives. She and Rhys fall overwhelmingly, beautifully in love. Be still my beating YA heart. The Night Court understands the threat posed by the King of Hybern, former master to Amarantha and loser of the war between the fae and humans 500 years earlier. Now he’s ready to strike, and the Night Court moves decisively against him while other fae courts debate and deny. This puts Rhys again in the role he’s always played – the bad guy, though he is not such thing. They come close to losing, again and again.

Mist and Fury is a massive world-builder. Maas’ Prythian had scope in the first book, but once out from under that mountain, it unfolds into a universe. Her descriptions are evocative and her settings, from grand to modest, perfectly suited to the action that takes place within each. Rhys goes from a Court to a palace to a townhouse to a cabin, revealing new, corresponding levels of himself in each place. He is a different person in each place, yet they all mesh together to form one of the best-written YA characters I have ever read. Feyre grows in this book too, from lovestruck to broken to shakily standing, despite her doubts. In the first book she was all heart, but now you’re in her head.

Maas gives a twist at the end that made me gasp. That’s all I need to know I really enjoyed a book: I did not see that coming! It’s gratifying and infuriating and snowballs right into the next book. There’s no happy ending here, just our band of heroes standing at the edge of a proverbial cliff, with an army at their backs.  And me, waiting for May when A Court of Wings and Ruin will be released.

2 thoughts on “Review: A Court of Mist and Fury”